Skip to content
There are 10 types of people in this world: those who understand binary, and those who don’t.
I regurgitate this old gag because I’ve just wasted the last five hours trying to track down the source of a quote that quantifies plots in a similar fashion: “All great literature is one of two stories: a man goes on a journey or a stranger comes to town.” 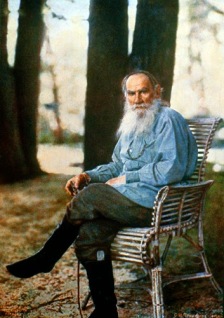 I’d always thought this quote came from EM Forster and his lectures contained in Aspects of the Novel, but a quick check through my reference titles told me I was wrong. Forster never said any such thing. I consulted Foster-Harris, who quantified plots like hepatitis infections (Type A, Type B and Type C). But Foster-Harris is known for arguing that there are three plots – not two – and there’s no suggestion he made the observation I was looking to cite.

I liked the original quote. I thought it would sit well at the start of a paper I’m currently writing. And so I started to dig. The first online search, a Goodreads link, suggested Tolstoy was the source. A few others support this claim. I was pleased with this. Tolstoy’s name has gravitas and so I set about trying to find a citable reference.
Except, I can’t find any record of Tolstoy having made the remark.
Tolstoy lived from 1828 to 1910. The majority of his work is available through public domain sites like Project Gutenberg and the Internet Archive. You can read a lot of Tolstoy for free online. But it seems unlikely you’ll read a passage where he says, “All great literature is one of two stories: a man goes on a journey or a stranger comes to town.” The reason why you’re unlikely to find such a passage is because Tolstoy never said the damned words.
Admittedly there’s a book on Amazon entitled ‘Leo Tolstoy – The First Distiller, A Comedy: “All great literature is one of two stories; a man goes on a journey or a stranger comes to town.”’ But there is no explanation as to why this copy of that play has that subtitle. Reading the text of The First Distiller, I can’t find that particular quote in the text.
So I broadened my search and discovered the following revelations.
Dostoevsky didn’t say it. There’s even an anti-helpful reference on Dostoevsky’s wikiquotes page explaining that they’re sure he didn’t say it and they’d like an email from anyone who can prove that he did.
Thanks for that wikiquotes.
Mary Morris, editor of The Illustrated Virago Book of Women Travellers, attributes the quote to spy novelist* John Gardner. Many others mention John Gardner as a likely source and given that Gardner wrote prolifically on the subject of writing (The Art of Fiction, On Moral Fiction, On Becoming a Novelist), he does seem a likely candidate. However, none of his titles specifically contain this quote.
A New York Times article attributes the quote to historical fiction novelist Max Byrd.
Byrd is another prolific writer who reviews books and writes fiction. However, the only online reference to Byrd mentioning this idea comes in a 2010 book review for Michael O’Brien’s Mrs Adams in Winter. Even then, Byrd couches the quote in language that suggests the idea is axiomatic amongst writers rather than his own original observation:
“Novelists sometimes insist that there are really only two possible plots in literature: somebody goes on a journey, or a stranger comes to town.”
However, even though Byrd doesn’t use the quote with authority, I figured I could attribute him as an original source. After trimming the first four words from the quote it read like my memory of the original and Byrd’s reputation does give the comment some substance.
And yet, when I placed it at the top of the paper I was writing, it didn’t seem like quite the right way to begin. Given that the piece is about the disparate number of potential plots in fiction, I thought it might be better to start with a joke:
There are 10 types of people in this world: those who understand binary, and those who don’t.
If only I could find out who originally said that.