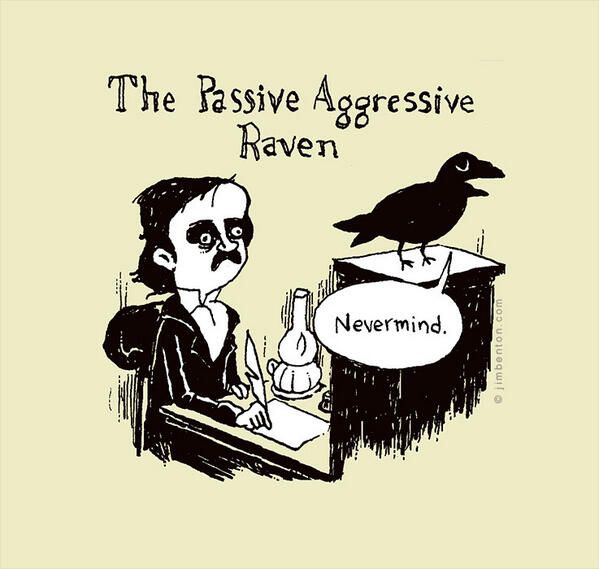 Who wrote it?
As I mentioned back in August, I’m a huge fan of Edgar AllanPoe.  I used his ‘Philosophy on Composition’ when I was writing the thesis for my PhD; and I suspect I was strongly influenced by his poem ‘The Raven’ when I wrote my own novel Raven and Skull; and I admire Poe and the tremendous amount he managed to achieve in his short and troubled life. Poe is rightly regarded as the master of the horror story, the author of the prototypical amateur detective story, and a man whose life was as tragic and mysterious as the darkest of his narratives. I wanted to write about Poe again this week because tomorrow, October 7th, marks the 170th anniversary of his death.
What’s it about?
A very unhappy man, grieving for a lost love, is alone at home, late at night, pouring over his books. A raven appears at his window and, after he has invited the bird into his home, the man begins to fear it is a dark representative from the supernatural realm.
Why is it worth reading?
It’s Edgar Allan Poe. Most of Poe’s writing is essential reading for people who own eyes. This story is worth reading because it’s presented in poetic form and it’s a piece that’s been parodied and reinterpreted again and again and again. Each of the reinventions of Poe is an homage to his brilliance.
What’s so special about it?
These are the opening verses:
Once upon a midnight dreary, while I pondered, weak and weary,
Over many a quaint and curious volume of forgotten lore—
While I nodded, nearly napping, suddenly there came a tapping,
As of some one gently rapping, rapping at my chamber door.
“’Tis some visitor,” I muttered, “tapping at my chamber door—
Only this and nothing more.”
Ah, distinctly I remember it was in the bleak December;
And each separate dying ember wrought its ghost upon the floor.
Eagerly I wished the morrow;—vainly I had sought to borrow
From my books surcease of sorrow—sorrow for the lost Lenore—
For the rare and radiant maiden whom the angels name Lenore—
Nameless here for evermore.
And the silken, sad, uncertain rustling of each purple curtain
Thrilled me—filled me with fantastic terrors never felt before;
So that now, to still the beating of my heart, I stood repeating
“’Tis some visitor entreating entrance at my chamber door—
Some late visitor entreating entrance at my chamber door;—
This it is and nothing more.”
Presently my soul grew stronger; hesitating then no longer,
“Sir,” said I, “or Madam, truly your forgiveness I implore;
But the fact is I was napping, and so gently you came rapping,
And so faintly you came tapping, tapping at my chamber door,
That I scarce was sure I heard you”—here I opened wide the door;—
Darkness there and nothing more.
If you want to hear this being read by the dulcet tones of the late Christopher Lee, then you’ll want to follow this link: https://www.youtube.com/watch?v=BefliMlEzZ8
And, if you have dreams to write to this standard, please take a look at my book, How To Write Short Stories and Get Them Published: https://www.amazon.co.uk/dp/1472143787/ref=cm_sw_em_r_mt_dp_U_fpDlDbM5CS66H